The High Road team presented to students at Sonoma State University as part of the Human Rights Awareness Tour, a traveling group of speakers, artists, and activists. Run by John Corkery of Salt Lake City, the event features a variety of different human rights activists and artists at university stops around the country.

High Road presented at four university classes throughout the day. At the first Communications class, taught by Professor Shepherd Bliss, Rocky presented a general speech on High Road, and about the need for awareness about the deterioration of the rule of law in the US. In a Leadership Class taught by Brandon Kotler, Rocky spoke about the rare and crucial leadership of a few individuals in the face of the worst human rights atrocities. In a Law class taught by Diana Grant, we showed High Road’s video on torture. In the fourth class, also taught by Professor Bliss, Rocky gave a brief presentation about the rule of law, then opened the subject up for discussion. The class went around in a circle, and described their reactions in one word. Most of the students were very affected, using words like “surprised,” “scared,” “helpless,” and “concerned.” The class discussed the importance of turning this concern into action. The class was so interested that they all arrived at the auditorium later that evening for Rocky’s school-wide presentation.  The final presentation, held in the Union’s Auditorium, was High Road’s multimedia piece on the rule of law. 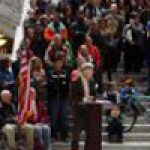 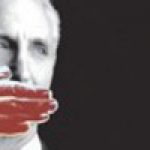