The Armenian National Committee of America asked High Road Director Rocky Anderson to speak at the 94th anniversary of the Armenian Genocide Commemoration in Salt Lake City.  ANCU organized leading scholars and activists to protest the world’s continuous refusal to recognize the Armenian genocide as a genocide.   Rocky spoke to the crowd about the atrocities of the Armenian genocide and the responsibility we all have to push our elected leaders to recognize and act on past, present, and future atrocities. 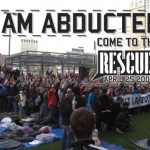