Take Action: What you can do today!
Sign the letter to the Spanish people
asking them to prosecute torture
February 10-14, 2011

About the campaign: In our continued effort to bring Bush-era officials to justice for their human rights abuses, to deter war crimes, and to take a vital step toward restoration of the rule of law, High Road for Human Rights has partnered with several other organizations in asking the Spanish government to do what the U.S. won’t: prosecute torture.

Spanish courts are currently considering prosecuting six of the Bush’s lawyers under international law. The Obama administration has been working hard behind the scenes to stop this from happening, but, by doing so, our government is violating its treaty commitments and the fundamental tenets underlying the Nuremberg Principles and the U.N. Charter.  Our campaign against impunity includes an open letter to the Spanish people and ads in prominent Spanish papers and billboards.

Immediate steps to take:
Sign this letter to the Spanish people by Valentine’s Day, 2011 letting them know the people of the U.S. expect accountability for violations of the law and support measures to deter future human rights abuses.

Join us in sending the message that we
haven’t forgotten the outrages and expect accountability.
Accountability is crucial in deterring future war crimes. 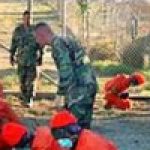